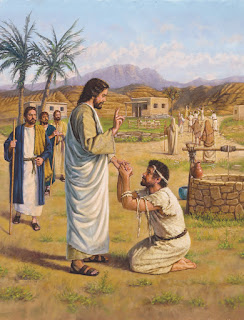 Luke 17:11-19 (ESV) On the way to Jerusalem Jesus was passing along between Samaria and Galilee. And as he entered a village, he was met by ten lepers, who stood at a distance and lifted up their voices, saying, “Jesus, Master, have mercy on us.” When he saw them he said to them, “Go and show yourselves to the priests.” And as they went they were cleansed. Then one of them, when he saw that he was healed, turned back, praising God with a loud voice; and he fell on his face at Jesus’ feet, giving him thanks. Now he was a Samaritan. Then Jesus answered, “Were not ten cleansed? Where are the nine? Was no one found to return and give praise to God except this foreigner?” And he said to him, “Rise and go your way; your faith has made you well.”

The Gospel reading for the Fourteenth Sunday after Trinity is also appointed to be read when the Church celebrates a Day of Thanksgiving. It is not hard to see why. The Samaritan leper falls on his face at Jesus’ feet and gives Him thanks for the miraculous healing He had done. In the original Greek of this story, the word we translate as “giving thanks” is εὐχαριστῶν (eucharistwn). That should sound a little familiar because another name for the Lord’s Supper is the Eucharist, which means “thanksgiving.” In the early days of the Christian Church, the name Eucharist was the most common way of referring to the Sacrament of the Altar.

There are two basic reasons why this title Eucharist caught on. First, when Jesus instituted the Lord’s Supper, we are told that He gave thanks before He distributed the bread and wine that were His true body and blood. So the Greek-speaking Christian Churches would have heard the word eucharistesas every time they celebrated the Lord’s Supper, and it became a shorthand way of talking about the whole event.

The second reason the early Church called it Eucharist is because when Christians celebrate the Communion liturgy and receive the Lord’s Supper, it is a way that they show Jesus their faith in His sacrifice for their sins along with their thanksgiving to Him for salvation. That is why in the Communion liturgy, the pastor says, “Let us give thanks unto the Lord our God,” and the congregation responds, “It is meet and right so to do.” So for centuries the Holy Eucharist has been recognized as the time for the faithful to receive Christ’s true body and blood for the forgiveness of their sins and in remembrance of His salvation, and as an opportunity to give thanks to Him for all His blessings to us.

The example of the Samaritan leper should lead us to the Holy Eucharist. It seems that nine of the lepers were Jews, so after being healed, they would have sought out the Temple in Jerusalem as God’s Old Testament location for worship and praise, and surely they would have given thanks to God for sending this mighty prophet Jesus to heal them. But what the nine lepers didn’t get, and what the one Samaritan leper did realize, was that the location for worshiping, thanking, and praising God had shifted away from Jerusalem. The Holy Spirit worked faith in that foreign leper’s heart and moved him to turn around and head back to Jesus, all the while proclaiming the goodness of God who had healed him, and when the Samaritan got back to Jesus, he threw himself before Him, giving thanks.

While we should imitate the gratitude of the Samaritan by showing our thanksgiving to Jesus, the main point is that we should, like the Samaritan, find God in the flesh and blood of Jesus Christ, who gave His body and shed His blood on the cross to save us. And the only place in the entire world where we can actually receive His true body and true blood in our mouths is in the Eucharist, where Jesus comes to us to feed us with Himself, giving us forgiveness of sins, life, and salvation.

It would be ingratitude to say, “No thanks, Jesus. I don’t need what you are offering.” But the response of faith is to say, “Lord, I, a poor, miserable sinner humbly bow to receive your precious body and blood, and I offer you the lowly sacrifice of my thanksgiving to you, for all that you have done to save and preserve me.”

And to those who have been baptized, absolved, and eucharisted, Jesus says, as he did to the Samaritan, “Rise, and go your way. Your faith has saved you.” He has come to heal you, and now He sends you out to live by faith in Him and love for your neighbor.

Prayer (LSB 846):
1. Your hand, O Lord, in days of old
Was strong to heal and save;
It triumphed over ills and death,
O’er darkness and the grave.
To You they came, the blind, the mute,
The palsied and the lame,
The lepers in their misery,
The sick with fevered frame.
2. Your touch then, Lord, brought life and health,
Gave speech and strength and sight;
And youth renewed and frenzy calmed
Revealed You, Lord of light.
And now, O Lord, be near to bless,
Almighty as before,
In crowded street, by beds of pain,
As by Gennes’ret’s shore.
3. O be our great deliv’rer still,
The Lord of life and death;
Restore and quicken, soothe and bless,
With Your life-giving breath.
To hands that work and eyes that see
Give wisdom’s healing pow’r
That whole and sick and weak and strong
May praise You evermore. Amen.