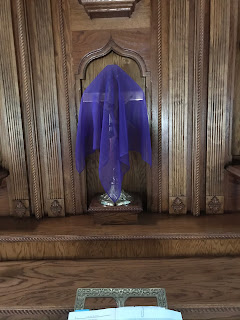 “O come, let us fix our eyes on Jesus,
the founder and perfecter of our faith,
who for the joy that was set before him endured the cross,
despising the shame,
and is seated at the right hand of the throne of God.”
(Gradual for Lent, based on Hebrews 12:2)

Yesterday began Passiontide, the last two weeks in Lent. I never understood the purpose of “tide” endings (Adventide, Christmastide, Eastertide, etc.), so I looked it up! According to Merriam-Webster, “In addition to its familiar sense referring to the rising and falling of ocean levels, the dictionary defines tide as a standalone noun: ‘an ecclesiastical anniversary or festival; also : its season.’ Deriving from the Old English tīdan, it can be used in combination for celebrations that pop up at other times of the year, such as Eastertide. Tīdan resembles the Old English noun tīd, meaning ‘time.’”

There are two traditional changes in our sanctuary appointments and the liturgy during Passiontide. The crucifixes in the sanctuary are now veiled, so that as our mouths and ears have been fasting from Alleluia for all of Lent, now our eyes fast as well—we will not look upon these signs of joy until the Easter Vigil. Similarly, we have been fasting from the joyful Gloria in Excelsis throughout Lent, and now we now undertake a two week fast from the Gloria Patri. The return of these signs, words, and sounds at Easter will underscore our joyful celebration of Christ’s Resurrection.

Although we cannot experience these changes together right now, I did still want to highlight them, and I thank Nancy Axelson for veiling the two crucifixes in our sanctuary.

I think following such liturgical customs is good, since it marks off Lent and Passiontide from the rest of the year and makes us “take notice,” but the one that has always struck me as the strangest is the veiling of the crucifix. You’d think that during Passiontide, you would want to highlight the cross and the Crucified One, not hide them. While the “our-eyes-are-fasting-from-this-symbol-of-joy” interpretation of the custom is one way of looking at it, another perspective is that the veiling actually draws attention to the crucifix. We all know what’s under the veil, and we take special notice of the crucifix during Passiontide, while we might take it for granted the rest of the year.

On Easter, the veils are removed and our eyes get to feast on the joyful crucifixes again, as the angel announces, “Do not be alarmed. You seek Jesus of Nazareth, who was crucified. He has risen; he is not here. See the place where they laid him” (Mark 16:6). The phrase “who was crucified” also could be translated at “The Crucified One.” On Easter and every day, we rejoice in Him “who was delivered up for our trespasses and raised for our justification” (Rom 4:25), but as cross-bearing Christians (Crosstians?) on this side of the resurrection, we place special emphasis on the crucifixion, following in the footsteps of St. Paul: “we preach Christ crucified” (1 Cor 1:23). In fact, when he came to the Corinthians, he said “I did not come proclaiming to you the testimony of God with lofty speech or wisdom. For I decided to know nothing among you except Jesus Christ and him crucified” (1 Cor 2:1-2). And as Jesus says to all of His disciples, "If anyone would come after me, let him deny himself and take up his cross daily and follow Me" (Luke 9:23).

Prayer: On my heart imprint Your image,
Blessèd Jesus, King of grace,
That life’s riches, cares, and pleasures
Never may Your work erase;
Let the clear inscription be:
Jesus, crucified for me,
Is my life, my hope’s foundation,
And my glory and salvation! Amen. (LSB 422) 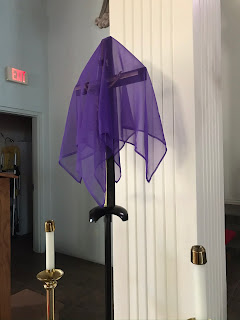