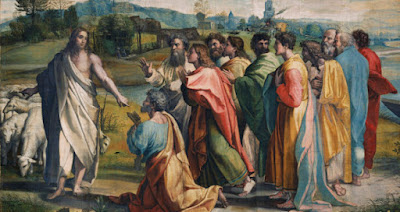 On Maundy Thursday, after Jesus had predicted His death, His disciples' fleeing in fear, and His resurrection three days later, Peter said to Jesus, "Even though they all fall away, I will not.” But Jesus said to him, “Truly, I tell you, this very night, before the rooster crows twice, you will deny me three times.” Three times Peter would deny his Lord, even to the point of denying that he knew Jesus, which led to Peter weeping in sorrow over his failure.

We should recognize in Peter an example to follow in the way he expressed his contrition over what he had done. Unlike Judas, who did have a change of heart but tried to deal with his guilt on his own, Peter had sorrow over his sin that prepared him for the Absolution he would receive on Easter, when Jesus appeared to the apostles, showed them His hands and side, and spoke the forgiving, “Peace be with you.”

And later on, in Galilee, Peter got a special singling-out, a threefold restoration that left no doubt he was in the good graces of Jesus. “Feed my lambs.” “Tend my sheep.” “Feed my sheep." The threefold admonition of Jesus to Peter negates his threefold denial, and then, “Follow Me,” Jesus said to the restored Peter.

And now He says the same to you. “If anyone would come after me,” Jesus says, “let him deny himself and take up his cross and follow me. For whoever would save his life will lose it, but whoever loses his life for my sake and the gospel’s will save it. For what does it profit a man to gain the whole world and forfeit his soul?”

Through your Baptism into Christ, you have received a threefold restoration from your fallen, sinful nature: the Triune Name, "Father, Son, Holy Spirit," has been put upon you with the water, removing your guilt and marking you as God's own. You have been given a gift greater than the whole world. You have lost your life in this world for the sake of Christ and have now found your life in Him and His Kingdom, where you are saved from sin, death, and hell and look forward to the resurrection of the dead and the life of the world to come. “Come, follow Me,” Jesus says. Come, for it is a truly joyful journey. Amen.

Prayer: O Lord God, You led Your ancient people through the wilderness and brought them to the promised land. Guide the people of Your Church that following our Savior we may walk through the wilderness of this world toward the glory of the world to come; through Jesus Christ, Your Son, our Lord, who lives and reigns with You and the Holy Spirit, one God, now and forever. Amen.