Are You Prepared for Persecution? 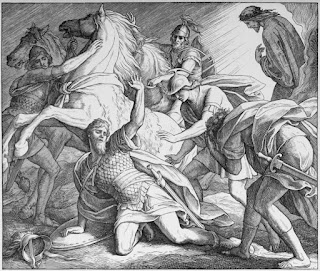 In our Seventh Sunday of Easter Gospel reading, Jesus says, “The hour is coming when whoever kills you will think he is offering service to God” (John 16:2). Those who killed Jesus thought they were serving God by killing Him; they thought He was a blasphemer and needed to be eliminated. So also, Jesus said, would unbelievers continue to persecute and even kill Christ’s disciples. Jesus said that the Church would follow in His footsteps and be persecuted for the sake of His righteousness.

Earlier in John 15, He said, “If the world hates you, know that it has hated me before it hated you. If you were of the world, the world would love you as its own; but because you are not of the world, but I chose you out of the world, therefore the world hates you. Remember the word that I said to you: ‘A servant is not greater than his master.’ If they persecuted me, they will also persecute you. If they kept my word, they will also keep yours. But all these things they will do to you on account of my name, because they do not know him who sent me” (John 15:18-21). In other words, when Christians are persecuted for the sake of Christ, it is not caused by someone’s personal hatred against the Christian, but it’s the result of the unbelieving world’s hatred of the One True God and the Savior of the world, Jesus Christ.

As we read through the Acts of the Apostles, we see this persecution of the Christian Church almost from day one. In Acts 5, St. Luke tells us that the earliest Christians did not meet this persecution with fear, but in fact, they rejoiced that they were counted worthy to suffer dishonor for the name of Christ. In Acts 7 we see St. Stephen become the first martyr, losing His life for confessing Jesus as the Christ, the Savior of the world. We see him dying confident of his salvation and even praying that Jesus would have mercy on his persecutors (if that sounds familiar, remember that Jesus prayed from the cross, “Father, forgive them, for they know not what they do”).

Now you would think that persecution would have snuffed out Jesus and the early church, but Christ rose from the dead victoriously and the early Christians knew that oppression could not keep the Gospel down. In spite of all the persecutions, the Word of the Lord continued to draw more and more disciples into the Church.

In Acts 9 we learn that all persecutors of the Church are fighting a futile battle, as Saul (also known as Paul) found out firsthand. On the road to Damascus, Jesus manifested Himself to Saul, who had been persecuting the Church, and the Lord said, “Saul, Saul, why do you persecute Me?” Here is the deep mystery of Christ in His disciples and with His disciples. Since Jesus said that He is with us to the end of the age—since He tells us that we are united with Him through Baptism and faith—this means that when anyone attacks Christians for their faith, they are actually attacking Jesus, the Lord of heaven and earth. And what has always kept Christians from falling away and renouncing their faith has been Christ’s presence with persecuted Christians, and the Holy Spirit’s comforting words in the Gospel.

I don’t know if any of us will face persecution, even to the point of death, for being a disciple of Jesus, but I can tell you this: if that persecution does come, it will be a blessing to us. According to our Lord Jesus, blessings often times come in the shape of crosses, not in the shape of earthly peace, health, and prosperity. No matter what comes in life, because of Christ’s presence with us, because of the promises that He makes in the Gospel – the promises that the Holy Spirit comes through the Word of God to continually remind us of – because of our Lord’s grace to us, we have nothing to fear. As St. Paul puts it so wonderfully, “I am sure that neither death nor life, nor angels nor rulers, nor things present nor things to come, nor powers, nor height nor depth, nor anything else in all creation, will be able to separate us from the love of God in Christ Jesus our Lord” (Romans 8:38-39).

Prayer: Lord Jesus Christ, before whom all in heaven and earth shall bow, grant courage that Your children may confess Your saving name in the face of any opposition from a world hostile to the Gospel. Help them to remember Your faithful people who sacrificed much and even faced death rather than dishonor You when called upon to deny the faith. By Your Spirit, strengthen them to be faithful and to confess You boldly, knowing that You will confess Your own before the Father in heaven, with whom You and the Holy Spirit live and reign, one God, now and forever. Amen.
Posted by Pastor Roth at 3:00 AM