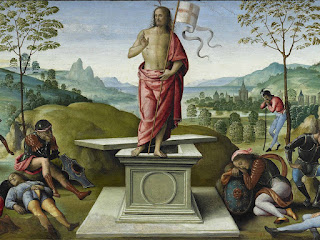 1 Corinthians 15:1-18 (ESV) Now I would remind you, brothers, of the gospel I preached to you, which you received, in which you stand, and by which you are being saved, if you hold fast to the word I preached to you—unless you believed in vain. For I delivered to you as of first importance what I also received: that Christ died for our sins in accordance with the Scriptures, that he was buried, that he was raised on the third day in accordance with the Scriptures, and that he appeared to Cephas, then to the twelve. Then he appeared to more than five hundred brothers at one time, most of whom are still alive, though some have fallen asleep. Then he appeared to James, then to all the apostles. Last of all, as to one untimely born, he appeared also to me.

One of my brother pastors was teaching a Bible Class on Luther’s Large Catechism and asked his class, “Why do you think Luther put the Ten Commandments first in the Catechism, and the Apostles’ Creed second.” One of his members replied, “Because the Ten Commandments were given by God, but the Creed was produced by men.”

But try that answer out on St. Paul, who gives us the heart and soul of the Creed in 1 Corinthians 15:3-5 —“For I delivered to you as of first importance what I also received: that Christ died for our sins in accordance with the Scriptures, that he was buried, that he was raised on the third day in accordance with the Scriptures, and that he appeared to Cephas, then to the twelve.” Sound familiar? The divinely inspired St. Paul writes to us the central portion of the Creed almost verbatim, and he describes this “as of first importance,” the most important truth in all the world.

Yes, more important even than the Ten Commandments. And here is why: St. Paul in his sermon at Pisidian Antioch recounts the death, burial, and resurrection of Jesus, and then he says: “Let it be known to you therefore, brothers, that through this man forgiveness of sins is proclaimed to you, and by him everyone who believes is freed from everything from which you could not be freed by the law of Moses” (Acts 13:38–39).” That is, if you want to be justified by God, to be declared righteous, holy, forgiven, saved—then it can only come through faith in the doctrine of the Second Article of the Creed, not from obedience to the Ten Commandments; salvation only comes from the death, burial, and resurrection of Jesus, not from “the Law of Moses”!

The reason Dr. Luther puts the Ten Commandments first in the Catechism is a logical ordering, not an ordering of importance or to imply that while the Ten Commandments are from God, the Creed is just from men. No, the Ten Commandments are given first to show us our sins and to teach us that we cannot be justified by obedience to the Law. The Commandments must first preach to us to drive us to despair of our own righteousness and instead acknowledge our utter sinfulness. Then we realize how desperate our situation is—we learn how all who rely on the Ten Commandments for salvation are in fact dead in their sins, condemned to hell. As St. Paul says, “You are severed from Christ, you who would be justified by the law; you have fallen away from grace” (Galatians 5:4). May God forbid that! So we desperately need the most important Word of God, the Gospel, to step in to save us and show us that the death of Jesus is a life-giving one.

Today more than ever it is essential for us to boldly proclaim the Creed that contains the Gospel that Jesus Christ, true God and true man, was truly was crucified, died, was buried, and rose as of first importance. Religions that hold the Law as of first importance have always been and always will be, but they cannot save. In response we must continue to confess the testimony of the Holy Scriptures, the testimony from God that all of our hopes hang on the cross, the body laid in the tomb, and that empty tomb on Easter morn, which testifies that Christ is risen, He is risen indeed, Alleluia!

1. Thanks to Thee, O Christ, victorious!
Thanks to Thee, O Lord of Life!
Death hath now no power o’er us,
Thou hast conquered in the strife.
Thanks because Thou didst arise
And hast opened paradise!
None can fully sing the glory
Of the resurrection story.
2. Thou hast died for my transgression,
All my sins on Thee were laid;
Thou hast won for me salvation,
On the cross my debt was paid.
From the grave I shall arise
And shall meet Thee in the skies.
Death itself is transitory;
I shall lift my head in glory.
3. For the joy Thine advent gave me,
For Thy holy, precious Word;
For Thy Baptism, which doth save me,
For Thy blest Communion board;
For Thy death, the bitter scorn,
For Thy resurrection morn,
Lord, I thank Thee and extol Thee,
And in heav’n I shall behold Thee. Amen.