Strength in God, not in Numbers 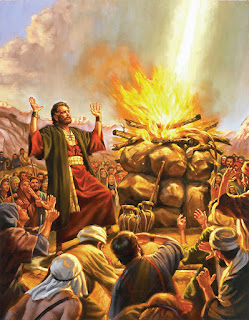 1 Kings 18:17-24, 36-40 (ESV) When Ahab saw Elijah, Ahab said to him, “Is it you, you troubler of Israel?” And he answered, “I have not troubled Israel, but you have, and your father’s house, because you have abandoned the commandments of the LORD and followed the Baals. Now therefore send and gather all Israel to me at Mount Carmel, and the 450 prophets of Baal and the 400 prophets of Asherah, who eat at Jezebel’s table.” So Ahab sent to all the people of Israel and gathered the prophets together at Mount Carmel. And Elijah came near to all the people and said, “How long will you go limping between two different opinions? If the LORD is God, follow him; but if Baal, then follow him.” And the people did not answer him a word. Then Elijah said to the people, “I, even I only, am left a prophet of the LORD, but Baal’s prophets are 450 men. Let two bulls be given to us, and let them choose one bull for themselves and cut it in pieces and lay it on the wood, but put no fire to it. And I will prepare the other bull and lay it on the wood and put no fire to it. And you call upon the name of your god, and I will call upon the name of the LORD, and the God who answers by fire, he is God.” And all the people answered, “It is well spoken.”…

And at the time of the offering of the oblation, Elijah the prophet came near and said, “O LORD, God of Abraham, Isaac, and Israel, let it be known this day that you are God in Israel, and that I am your servant, and that I have done all these things at your word. Answer me, O LORD, answer me, that this people may know that you, O LORD, are God, and that you have turned their hearts back.” Then the fire of the LORD fell and consumed the burnt offering and the wood and the stones and the dust, and licked up the water that was in the trench. And when all the people saw it, they fell on their faces and said, “The LORD, he is God; the LORD, he is God.” And Elijah said to them, “Seize the prophets of Baal; let not one of them escape.” And they seized them. And Elijah brought them down to the brook Kishon and slaughtered them there.

If Israel’s fate had been in the hands of democracy, the vote would have been: prophets of Baal, 450; Elijah, 1! As it was, Israel was a theocracy, with Elijah as the Lord’s appointed prophet, so the Lord’s will eventually would prevail. Yet Israel had become captivated by the “strength in numbers” of the Baal and Asherah prophets.

As Christians, we are free to defend democracy as the best form of public governance (or even the governance of congregations through voters’ assemblies), but we can never apply a “strength in numbers” philosophy to Christian doctrine, which is strictly defined only by the Holy Scriptures, God’s inspired and inerrant Word. As a favorite saying among Christian reformers in the Middle Ages and Reformation went, a simple layman with a clear text of Scripture could stand against a false teaching of even the Pope!

We also must be wary of drawing conclusions from numbers in religion, as if the fastest-growing sect must be “doing something right” that the rest are not. A growth-analysis of the “churches” of Baal and Asherah would have been quite impressive in Elijah’s day! No one is opposed to the true church growing, but we must be careful to preserve and teach the true and saving doctrine of the Bible, and then let the Lord do the work through His Word as we share the Gospel with our neighbors. “Through the Word and Sacraments, as through instruments, the Holy Spirit is given [John 20:22]. He works faith, when and where it pleases God [John 3:8], in those who hear the good news that God justifies those who believe that they are received into grace for Christ’s sake” (Augsburg Confession, Article V, Concordia, 33).

The only true growth in numbers comes from conversion and repentance, which involves fear, love, and trust in God above all things. The Israelites went from apathy toward the Lord to fear after He exposed Baal as nothing and revealed His incredible power. They were brought to their knees, and onto their faces! Yet this response was not yet true love or trust in God, but only fear. And not just filial fear (as children respect their parents) but servile fear (as a slave cowers at the sight of an abusive slaveholder). It would take further teaching and preaching by Elijah and other prophets to restore the people to a right worship of God, entailing fear, love, and trust in Him above all things.

Our Lord Jesus Christ has rescued us from servile fear by “taking the form of a servant” and “becoming obedient to the point of death, even death on a cross” (Philippians 2:7-8). Since He has set us free from sin, we fear, love, and trust in Him above all things. At the name of Jesus, our knees bow (or at least our hearts do!) and tongues confess that Jesus Christ is Lord, to the glory of God our loving Father (2:9-11). On the Last Day, believers will already be kneeling when He returns, but unbelievers will be like those Israelites in Elijah’s day: they will be brought low in fear and trembling, and their confession of Christ will not be one of love and trust. They will be lost, for their worship lacked faith in God’s mercy, through which we are saved.

Prayer: Lord God, heavenly Father, through the prophet Elijah, You continued the prophetic pattern of teaching Your people the true faith and demonstrating through miracles Your presence in creation to heal it of its brokenness. Grant that Your Church may see in Your Son, our Lord Jesus Christ, the final end-times prophet whose teaching and miracles continue in Your Church through the healing medicine of the Gospel and the Sacraments; through Jesus Christ, our Lord. Amen.