True Unity in the Cross 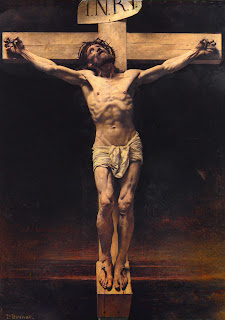 1 Corinthians 1:10-18 (ESV) I appeal to you, brothers, by the name of our Lord Jesus Christ, that all of you agree, and that there be no divisions among you, but that you be united in the same mind and the same judgment. For it has been reported to me by Chloe’s people that there is quarreling among you, my brothers. What I mean is that each one of you says, “I follow Paul,” or “I follow Apollos,” or “I follow Cephas,” or “I follow Christ.” Is Christ divided? Was Paul crucified for you? Or were you baptized in the name of Paul? I thank God that I baptized none of you except Crispus and Gaius, so that no one may say that you were baptized in my name. (I did baptize also the household of Stephanas. Beyond that, I do not know whether I baptized anyone else.) For Christ did not send me to baptize but to preach the gospel, and not with words of eloquent wisdom, lest the cross of Christ be emptied of its power. For the word of the cross is folly to those who are perishing, but to us who are being saved it is the power of God.

The church in Corinth was falling apart. Paul had founded this congregation on the solid foundation of the Gospel, but now factionalism was threatening to undo everything. So Paul says in the Epistle for the 18th Sunday after Trinity, “I appeal to you, brothers, by the name of our Lord Jesus Christ, that all of you agree, and that there be no divisions among you, but that you be united in the same mind and the same judgment.”

To address the divisions in the Corinthian congregation, Paul basically says: “You are all children of God in Christ Jesus; now start behaving like it! Agree on the doctrine I taught you; don’t be divided over petty things and personality differences; be united under God’s Word as I have preached it and as you have learned it from the Holy Scriptures.”

Notice that Paul doesn’t just say, “Can’t we all get along? Can’t we just put our differences aside?” He says that everyone in a congregation needs to be one in mind and judgment. Those aren’t arbitrary things. He doesn’t give us permission to believe and do whatever we want. In the Christian church, we aren’t all entitled to our own opinions about doctrine. Our unity has to be based in God’s Word, and there is no room for disagreements about the doctrines of Scripture. In other words, believing what the Bible teaches is not negotiable in a congregation, and public disagreements about doctrine cannot be tolerated, even if that means someone has to leave.

Throughout Paul’s letters to congregations, he repeatedly appeals to them to be united under the common doctrine taught to them and also to live at peace with one another through love and forgiveness. To the church at Rome, Paul wrote, “Live in harmony with one another. Do not be haughty, but associate with the lowly. Never be conceited. Repay no one evil for evil, but give thought to do what is honorable in the sight of all. If possible, so far as it depends on you, live peaceably with all.” (Romans 12:15-18)

When Paul sets out to restore peace to the congregation at Corinth, what does he do? He preaches Jesus Christ crucified for the sins of the world. Paul takes the attention off of Paul and Apollos and Peter and all the people, and fixes their eyes on the cross. The cross humbles us and keeps us from thinking we’re in control of our salvation, or that this is somehow our own church to tinker with. The cross says to us, “This church belongs to the Lord, because He’s the one who bought it with His own blood.”

But most importantly, on the cross we see that peace has been made between God and us; the word of the cross proclaims forgiveness of sins into our ears, and so also offers us the freedom to live at peace with one another in the church. “Forgive us our trespasses as we forgive those who trespass against us.” If we believe that God freely forgives us for Christ’s sake, then we too will gladly forgive those who sin against us. We will be reconciled with each other when sins have divided us.

Embrace the word of cross of Jesus Christ, which saves you and puts you at peace with God and one another. That is where our true unity lies: in Jesus Christ’s cross, by which we have died to the world and the world has died to us. And that unity is one that lasts beyond the grave and extends forever.

May God bestow on us His grace and favor
That we follow Christ our Savior
And live together here in love and union
Nor despise this blest Communion!
O Lord, have mercy!
Let not Thy good Spirit forsake us;
Grant that heav’nly-minded He make us;
Give Thy Church, Lord, to see
Days of peace and unity:
O Lord, have mercy! Amen.