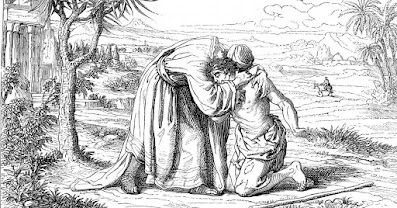 Luke 15:1-3, 11-32 (ESV) Now the tax collectors and sinners were all drawing near to hear him. And the Pharisees and the scribes grumbled, saying, “This man receives sinners and eats with them.” So he told them this parable… “There was a man who had two sons. And the younger of them said to his father, ‘Father, give me the share of property that is coming to me.’ And he divided his property between them. Not many days later, the younger son gathered all he had and took a journey into a far country, and there he squandered his property in reckless living. And when he had spent everything, a severe famine arose in that country, and he began to be in need. So he went and hired himself out to one of the citizens of that country, who sent him into his fields to feed pigs. And he was longing to be fed with the pods that the pigs ate, and no one gave him anything. “But when he came to himself, he said, ‘How many of my father’s hired servants have more than enough bread, but I perish here with hunger! I will arise and go to my father, and I will say to him, “Father, I have sinned against heaven and before you. I am no longer worthy to be called your son. Treat me as one of your hired servants.” ’ And he arose and came to his father. But while he was still a long way off, his father saw him and felt compassion, and ran and embraced him and kissed him. And the son said to him, ‘Father, I have sinned against heaven and before you. I am no longer worthy to be called your son.’ But the father said to his servants, ‘Bring quickly the best robe, and put it on him, and put a ring on his hand, and shoes on his feet. And bring the fattened calf and kill it, and let us eat and celebrate. For this my son was dead, and is alive again; he was lost, and is found.’ And they began to celebrate. “Now his older son was in the field, and as he came and drew near to the house, he heard music and dancing. And he called one of the servants and asked what these things meant. And he said to him, ‘Your brother has come, and your father has killed the fattened calf, because he has received him back safe and sound.’ But he was angry and refused to go in. His father came out and entreated him, but he answered his father, ‘Look, these many years I have served you, and I never disobeyed your command, yet you never gave me a young goat, that I might celebrate with my friends. But when this son of yours came, who has devoured your property with prostitutes, you killed the fattened calf for him!’ And he said to him, ‘Son, you are always with me, and all that is mine is yours. It was fitting to celebrate and be glad, for this your brother was dead, and is alive; he was lost, and is found.’ ”

In Luke 15, Jesus tells us the parable of the Prodigal Son (prodigal means wasteful) and his Forgiving Father in order to teach self-righteous Pharisees of all times that the grace of God stops short of no man, that God does not desire the death of a sinner but rather he turn from his ways and live, that God desires all to repent and come to a knowledge of the truth.

When the wasteful son took his inheritance and ran, he wasted more than material goods; he wasted his father’s love for him. When the younger son asks for his inheritance early he basically was saying to his father, “I wish you were dead. I want no part of life with you anymore. I’d rather go off and spend my time and money with people I don’t even know.” When Jesus told this story, the people who heard it would have expected the father to blow up at the son in anger and deny his request. But the father did not; he graciously granted his son’s wishes.

The son quickly liquidated his share of the inheritance and headed to a foreign land with lots of cash in hand. He squandered it all, living recklessly. After the money was gone, the son was so desperate he became a servant for a foreigner just to survive, doing something that a good Hebrew would have found unthinkable: feeding pigs (the Old Testament deems pigs unclean, and Israelites couldn’t eat or touch them). He found himself broke and starving in another land, but finally came to his senses. He realized that his father’s hired servants were much better off than he was, so he planned to return, groveling, and make a deal with his father: he would give up the title of “son” in exchange for a position of servant in his father’s house. It wouldn’t be ideal, but that way at least he wouldn’t be starving and broke.

So the son headed home to grovel and bargain for acceptance, but his father’s behavior was totally unexpected. He still loved his son and even stood outside gazing longingly into the distance, hoping for his son’s return. And when he saw the son on the horizon, the father was so moved with compassion that he ran to embrace and kiss his son. In that culture it would have been humiliating for a noble man to run: Aristotle wrote that “Great men never run in public.”

But the father was so overjoyed to see his son that he tossed societal convention aside, and embraced and kissed him. And remember what the son was doing before he came back? He was a pig herder, so he was filthy and smelly, yet the father didn’t care. He loved the son anyway. He was just delighted to have his lost son home again. This parable’s all about the father’s wasteful, unconditional, forgiving love. The sin is covered. Now all was made right again between the father and the prodigal son.

So who is the prodigal son? “Surely not I, Lord?” Yes, it is you. Read yourself into this parable. You didn’t birth yourself into the Father’s household, but even when you were dead in sin, He made you His child by baptizing you into His Son, giving you a place in His eternal home. But have you responded with complete gratitude and obedience and love for the Father, or have you despised Him and His gifts by wandering into sin?

You are the prodigal. By your sins you have said to Him, “I wish you were dead; I want no part of life with you; I’d rather go be elsewhere.” But how does the Father respond to your sinful efforts to run away from Him? He stands waiting with open arms, longing for your return, because He has already slaughtered His Lamb, His only-begotten Son, in order to atone for all your sinful straying. He has no wrath toward you. All He wants is for you to come home, so through His Word He sends His Holy Spirit out to call you to your senses, to call you to repent and return home. When you come back to His house, He embraces you and absolves you: “I forgive you all your sins in the name of the Father and of the Son and of the Holy Spirit.” When you are a child of God in Christ, you have a forgiving Father in heaven!

4. As a father, ever yearning,

Longing to be reconciled,

So my many sins and errors

Chast’ning frailty with His rod,

Not in vengeance with His terrors.

All things else have but their day;

5. Since there’s neither change nor coldness

In God’s love that on me smiled,

I now lift my hands in boldness,

Coming to You as Your child.

Grant me grace, O God, I pray You,

All my lifetime, day and night,

Love and trust You and obey You

And, when this brief life is o’er,

Praise and love You evermore. Amen.