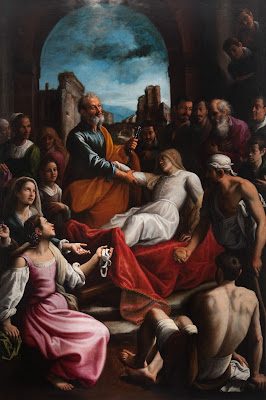 Dorcas (a Greek name) was also known as Tabitha (Aramaic). She lived in Joppa, the seaport of Jerusalem, about thirty miles to the northwest. Dorcas is not mentioned elsewhere in the Bible.

Dorcas was a disciple, which means that she had been baptized and was regularly taught the Word of Jesus (see Matthew 28:16-20) as an active member of the Christian congregation at Joppa. Dorcas and her fellow Christians gathered regularly for the Divine Service, where they “devoted themselves to the apostles’ teaching and the fellowship, to the breaking of bread and the prayers” (Acts 2:42). The Lord served Dorcas with His merciful forgiveness, given to her in preaching and in the Lord’s Supper. His mercy moved her to be merciful to others.

Dorcas’s good works were all the things she did in obedience to the Ten Commandments. The Greek word translated “acts of charity” (Acts 9:36) is the same word used by Jesus in the Sermon on the Mount to describe giving to the needy in secret (Matthew 6:1-4). So, while Dorcas was revered by the congregation for her good works, she did not seek praise for them. Her works were not earth-shattering, heroic deeds, but were simple and valuable services to those in need (Acts 9:39). She practiced the admonition, “Whatever your hand finds to do, do it with your might” (Ecclesiastes 9:10). We learn from her example to be hard working Christians who gladly serve wherever the opportunity arises and do not “eat the bread of idleness” (Proverbs 31:27).

When Dorcas died, the congregation at Joppa mourned its loss deeply. The church hoped that the Lord would help through His apostle Peter, who was in Lydda, only nine miles away. Peter came at once. He had no power in himself to raise the dead, but was wholly dependent on the Lord’s power, so he prayed for help. The Lord answered the prayer with a “Yes!” Peter told Dorcas to get up, and she did! The Lord still had mercy to show to others through her—in her lifetime, and every time her story is told!

As this news spread, many others came to believe in the God “who gives life to the dead,” “him who raised from the dead Jesus our Lord, who was delivered up for our trespasses and raised for our justification” (Romans 4:17, 24-25). They were incorporated into the church and saved by Baptism, according to God’s “own mercy, by the washing of regeneration and renewal of the Holy Spirit” (Titus 3:5). They then could proclaim, “Blessed be the God and Father of our Lord Jesus Christ! According to his great mercy, he has caused us to be born again to a living hope through the resurrection of Jesus Christ from the dead” (1 Peter 1:3). And, living with gratitude under such great mercy, the congregation at Joppa could show mercy to others.

We too have been shown great mercy and are called to be merciful in our vocations. Daily we realize that our mercy always falls short, so we cry out, “Lord, have mercy!” with the assurance that God “is kind to the ungrateful and the evil” (Luke 6:35). On that basis, Jesus exhorts us, “Be merciful, even as your Father is merciful” (Luke 6:36).

1. For all the faithful women

To You shall thanks be given;

They served with strength and gladness

To You their lives bore witness,

12. Lord, hear our thanks for Dorcas,

Her hands were cups of kindness,

Send us, O Christ, Your Body,

And touch them with compassion

3. O God, for saints and servants,

In whom through all the ages

That, faithful in Your service,

4. All praise to God the Father!

All praise the Holy Spirit,

With saints who went before us,