Learning from the Flood 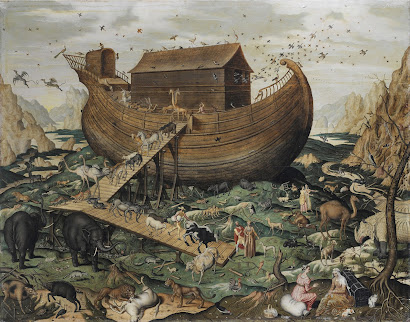 Genesis 7:1-5 (ESV) Then the LORD said to Noah, “Go into the ark, you and all your household, for I have seen that you are righteous before me in this generation. Take with you seven pairs of all clean animals, the male and his mate, and a pair of the animals that are not clean, the male and his mate, and seven pairs of the birds of the heavens also, male and female, to keep their offspring alive on the face of all the earth. For in seven days I will send rain on the earth forty days and forty nights, and every living thing that I have made I will blot out from the face of the ground.” And Noah did all that the LORD had commanded him.

In December 2004, a tsunami killed hundreds of thousands of people in Southeast Asia. In late August 2005, Hurricane Katrina left New Orleans and other parts of the Gulf Coast underwater, and took more than a thousand lives. Hurricane Harvey, in 2017, had fewer than a hundred fatalities, but its devastation of the Texas coastal region was astonishing.

However, no matter how devastating the tsunami and Hurricanes Katrina and Harvey were, they cannot even begin to compare to the great Flood and the decimation of the world’s population.

One might protest: “It seems so cruel that God would destroy all those people and animals in the Flood. How could He choose to save only eight people and still be a good God?” How would you respond to a friend who said this?

This is a tough question, but perhaps a response like this would be a place to start: We know that the wages of sin is death, and that all have sinned and deserve nothing but God’s wrath and punishment. In Noah’s time, everyone was guilty, including Noah and his family. Yet Noah and his family had received the gift of faith, and God had forgiven their sins and declared them righteous. The rest of the world had not repented and had grown indifferent to God. So God was fully justified in bringing their lives to an end.

This does seem cruel to human reason, but in the face of this we must confess, based on Scripture, that God is just and good, and those people had rejected His righteousness and goodness. Moreover, it is never for us to question why some people are saved and others are not. We know from God’s Word that He desires that all people be saved, but we also know that He lets Himself be rejected. Since only God knows the answer to this paradox, we must let Him be God and trust that He will work everything for the good of those who love Him.

The wicked were going about business as usual when the Flood came. There was nothing inherently wrong with marrying and eating and drinking, since these are just necessities of life; but since the people were set in their sinful ways and lacked faith in God, they were not included in the promise to Noah.

Today, the wicked go about their business as usual with no regard for God or His final judgment. They perform sinful, perverted acts with no fear of consequences. When we see Christian brothers and sisters participating in the deeds of unbelievers, such as drunkenness, sexual immorality, and lying, we should warn them that they are putting themselves in great danger by willfully disobeying God’s Law and embracing the world’s wickedness. While Christians are always in the world, they should emulate Noah and not be of the world.

We will, of course, face trials and temptations in the world, but God’s dealings with Noah are a pledge that He will also see us through such trials: “For if God did not spare the ancient world, but preserved Noah, a herald of righteousness, with seven others, when he brought a flood upon the world of the ungodly…then the Lord knows how to rescue the godly from trials, and to keep the unrighteous under punishment until the day of judgment, and especially those who indulge in the lust of defiling passion and despise authority” (2 Peter 2:5, 9-10).

Almighty and eternal God, according to Your strict judgment You condemned the unbelieving world through the flood, yet according to Your great mercy You preserved believing Noah and his family, eight souls in all. You drowned hard-hearted Pharaoh and all his host in the Red Sea, yet led Your people Israel through the water on dry ground, foreshadowing this washing of Your Holy Baptism. Through the Baptism in the Jordan of Your beloved Son, our Lord Jesus Christ, You sanctified and instituted all waters to be a blessed flood and a lavish washing away of sin. We pray that You would behold us all according to Your boundless mercy and bless us with true faith by the Holy Spirit, that through this saving flood all sin in us, which has been inherited from Adam and which we ourselves have committed since, would be drowned and die. Grant that we be kept safe and secure in the holy ark of the Christian Church, being separated from the multitude of unbelievers and serving Your name at all times with a fervent spirit and a joyful hope, so that, with all believers in Your promise, we would be declared worthy of eternal life; through Jesus Christ, our Lord. Amen.