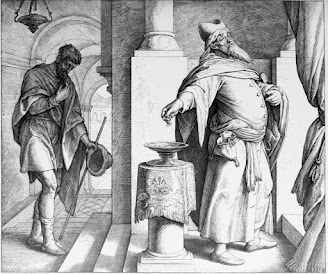 Luke 18:9-14 (ESV) Jesus also told this parable to some who trusted in themselves that they were righteous, and treated others with contempt: “Two men went up into the temple to pray, one a Pharisee and the other a tax collector. The Pharisee, standing by himself, prayed thus: ‘God, I thank you that I am not like other men, extortioners, unjust, adulterers, or even like this tax collector. I fast twice a week; I give tithes of all that I get.’ But the tax collector, standing far off, would not even lift up his eyes to heaven, but beat his breast, saying, ‘God, be merciful to me, a sinner!’ I tell you, this man went down to his house justified, rather than the other. For everyone who exalts himself will be humbled, but the one who humbles himself will be exalted.”

In the Gospel reading for the Eleventh Sunday after Trinity, Jesus tells us that the Pharisee went to the Temple to pray. However, the Pharisee didn’t really go up to pray, but to be seen and heard, to compare himself to others, and to boast. The Pharisee stood by himself in a very noticeable way, set apart from everyone else so that people would look at him and be impressed. Then the Pharisee prayed, if you can call it a prayer: “God, I thank you that I am not like other men, extortioners, unjust, adulterers, or even like this tax collector. I fast twice a week; I give tithes of all that I get.”

But the problem with the Pharisee’s “prayer” is that he wasn’t really giving thanks; he considered that he possessed all the things he was talking about by his own efforts, so his prayer wasn’t thanking God for gifts received; rather, he was using that speech as an opportunity to compare himself to others, look down on them with contempt, and declare himself righteous before God and man. And there is some of that Pharisaical attitude in all of us. So we need to learn from this parable to seek out, find, and attack the Pharisee inside our sinful hearts.

Even if you can fool yourself and other people into thinking you’re righteous, here is the kicker: you can’t hide your sins from God, and that is what damned the Pharisee: he thought either that he had no sins or that he could cover them up with his good deeds. The Pharisee’s kind of outward righteousness, and our righteous deeds, aren’t the kind of righteousness that can get us right with God and save us. So repent.

Instead, we need a righteousness that covers all of our sins and truly fulfills all of God’s righteous Laws, and that is not something we can achieve or even find on our own. So if we want to be right with God, we can’t be like the Pharisee in his self-righteousness, but instead like the tax collector in his humility, repentance, and trust in God. Jesus tells us that he didn’t go up to the front of the Temple to be seen by all; he was embarrassed even to be seen, so he stayed far in the back. The tax collector didn’t shout up to God his virtues like the Pharisee, but he wouldn’t even look up to heaven out of guilt and shame. And he didn’t raise his hands in the air, presenting his good works to God, but he beat his breast out of grief over his sins. And as he continued to beat his breast, he prayed, “God, be merciful to me, a sinner!”

And God has been merciful to all of us sinners in Jesus Christ! When Jesus died, the curtain in the temple tore from top to bottom, signaling that ever since Christ’s sacrificial death, the Jerusalem temple is not the location of God’s merciful sacrifice for us, nor are we to offer our prayers there, but now the flesh and blood of Jesus Christ is the Temple of God and the location of the sacrifice that has saved us. In Him alone is the righteousness of God that saves; in Christ alone are we are declared righteous and acceptable in God’s presence. And so we poor, miserable sinners, like the humble tax collector, do not come before God with our own righteousness, but with the humble prayer, “God, be merciful to me, a sinner!”

And God is merciful toward you, because He has achieved atonement for all your sins in Jesus Christ and He promises to be merciful to all who trust in Christ’s atonement. Because of Jesus, you can be assured that the answer to your prayer for forgiveness is always going to be met with the Lord’s grace and mercy: “Yes! Yes!” He says to you: “You are my righteous child because I have given you regeneration and renewal in Holy Baptism. Every time you confess your sins, in Absolution I declare you righteous and holy for the sake of Jesus. And now come, my righteous child, to My table, and eat of the sacrificial Lamb, the true body and blood of Jesus given and shed for all of your sins.” And in Christ and His righteousness you have the righteousness that saves you, that puts you at peace with God and grants you everlasting resurrected life in heaven.

Prayer: O Jesus, Lord of the Sabbath, rescue us from our hypocrisy, which keeps us from seeing You as the center of all Scripture and acknowledging the present time as the time of salvation. Call us to repent of our self-righteousness so that we might look to You alone as the source of our life; for You live and reign with the Father and the Holy Spirit, one God, now and forever. Amen.