Forgiven Much, Loving Much 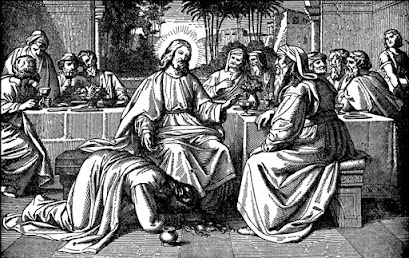 Luke 7:36-50 (ESV) One of the Pharisees asked him to eat with him, and he went into the Pharisee’s house and reclined at table. And behold, a woman of the city, who was a sinner, when she learned that he was reclining at table in the Pharisee’s house, brought an alabaster flask of ointment, and standing behind him at his feet, weeping, she began to wet his feet with her tears and wiped them with the hair of her head and kissed his feet and anointed them with the ointment. Now when the Pharisee who had invited him saw this, he said to himself, “If this man were a prophet, he would have known who and what sort of woman this is who is touching him, for she is a sinner.” And Jesus answering said to him, “Simon, I have something to say to you.” And he answered, “Say it, Teacher.” “A certain moneylender had two debtors. One owed five hundred denarii, and the other fifty. When they could not pay, he cancelled the debt of both. Now which of them will love him more?” Simon answered, “The one, I suppose, for whom he cancelled the larger debt.” And he said to him, “You have judged rightly.” Then turning toward the woman he said to Simon, “Do you see this woman? I entered your house; you gave me no water for my feet, but she has wet my feet with her tears and wiped them with her hair. You gave me no kiss, but from the time I came in she has not ceased to kiss my feet. You did not anoint my head with oil, but she has anointed my feet with ointment. Therefore I tell you, her sins, which are many, are forgiven—for she loved much. But he who is forgiven little, loves little.” And he said to her, “Your sins are forgiven.” Then those who were at table with him began to say among themselves, “Who is this, who even forgives sins?” And he said to the woman, “Your faith has saved you; go in peace.”

We’re like the Pharisees in that we don’t understand the depth of our sin. In truth, we are so sinful that we need forgiveness everyway we can get it. But Simon and the other Pharisees didn’t get that. Luke tells us three times that Simon is a Pharisee, so it has to be significant. It means that Simon had the typical self-righteous, prideful attitude of Pharisees throughout Luke’s Gospel. In chapter 7, we hear that the Pharisees rejected God’s purposes for themselves because they refused the baptism of repentance of John the Baptist. In chapter 11, when the Pharisees noticed that Jesus did not ceremonially wash before the meal, Jesus said, “you Pharisees clean the outside of the cup and dish, but inside you are full of greed and wickedness” (Lk 11:39).  In chapter 15, they complained about Jesus welcoming and eating with sinners. In chapter 18, Jesus tells the story of the Pharisee who went to the temple to pray, saying, “God, I thank you that I am not like the rest of these sinners.”

Since Simon was a Pharisee, it’s not surprising that he said to himself, "If this man were a prophet, he would know who is touching him and what kind of woman she is—that she is a sinner." Simon could only see external sins, sins between one person and another. He couldn’t see the deadly sin that was festering inside himself, the sins of self-righteousness and pride. He didn’t realize that he was sinning against God through these things, basically saying, “God, I only occasionally mess up, and even then, it’s not so big. I’m not really a sinner!” That’s why Jesus told Simon the parable about the two debtors and the creditor. And that is why today, we too need that condemning word of Law to be placed in our ears so we recognize that sins of self-righteousness and pride might not be apparent to the world, but they are sins against God and you need forgiveness for them.

The Law condemns you with continual accusation, but Jesus is the Man who is always ready and waiting to forgive your sins. Jesus had forgiven the sinful woman at some earlier time before the dinner table scene. But because the Law again had made her aware of her great sins, she wanted to hear Absolution from Jesus again. We learn from this woman that the Christian life is one of continual repentance and returning to the Lord for forgiveness. That’s why Jesus has given the Church the Office of the Keys, to give you the Absolution that you need to hear. Anytime your conscience is plaguing you, you can come to your pastor to confess your sins and receive Absolution with the same certainty as if Jesus were the Man speaking the words Himself.

Because Jesus forgave the sinful woman, she showed her love for Him through her actions. The forgiveness of your sins also frees you for works of love. These don’t include weeping at Jesus’ feet and wiping them with your hair; that’s not where Jesus directs you. Jesus points you to love Him by loving your neighbor. This is an impossibly large task, and you will take notice of your great failures to fulfill it, but you will also love your neighbor without even knowing it through your vocations. Changing diapers, feeding and clothing your children, helping out a friend in need, or taking care of your aging parents are all works of love. Works of love toward your neighbor are those that are done in faith, for the life you live in the body, you live by faith in the Son of God, who loved you and gave Himself for you (Gal 2:20).

The last words Jesus said to the sinful woman were “Your sins have been forgiven. Your faith has saved you. Go in peace.” Those are his words for you, too. St. Paul wrote, “since we have been justified through faith, we have peace with God through our Lord Jesus Christ” (Rom 5:1). Jesus told His disciples before His death, “Peace I leave with you; my peace I give you” (Jn 14:27). Through the Means of Grace, He delivers that peace to you today, the peace of sins forgiven, the peace of a clear conscience, the peace that surpasses all understanding.

1. Lord of our life and God of our salvation,

Star of our night and hope of ev’ry nation:

Hear and receive Your Church’s supplication,

2. See round Your ark the hungry billows curling;

See how Your foes their banners are unfurling

And with great spite their fiery darts are hurling,

3. Lord, be our light when worldly darkness veils us;

Lord, be our shield when earthly armor fails us;

And in the day when hell itself assails us,

Grant us Your peace, Lord:

4. Peace in our hearts, where sinful thoughts are raging,

Peace in Your Church, our troubled souls assuaging,

Peace when the world its endless war is waging,

Peace in your heaven. Amen.