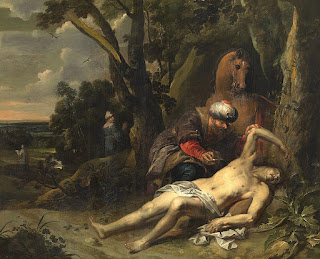 Luke 10:25-37 (ESV) And behold, a lawyer stood up to put Jesus to the test, saying, “Teacher, what shall I do to inherit eternal life?” He said to him, “What is written in the Law? How do you read it?” And he answered, “You shall love the Lord your God with all your heart and with all your soul and with all your strength and with all your mind, and your neighbor as yourself.” And he said to him, “You have answered correctly; do this, and you will live.” But he, desiring to justify himself, said to Jesus, “And who is my neighbor?” Jesus replied, “A man was going down from Jerusalem to Jericho, and he fell among robbers, who stripped him and beat him and departed, leaving him half dead. Now by chance a priest was going down that road, and when he saw him he passed by on the other side. So likewise a Levite, when he came to the place and saw him, passed by on the other side. But a Samaritan, as he journeyed, came to where he was, and when he saw him, he had compassion. He went to him and bound up his wounds, pouring on oil and wine. Then he set him on his own animal and brought him to an inn and took care of him. And the next day he took out two denarii and gave them to the innkeeper, saying, ‘Take care of him, and whatever more you spend, I will repay you when I come back.’ Which of these three, do you think, proved to be a neighbor to the man who fell among the robbers?” He said, “The one who showed him mercy.” And Jesus said to him, “You go, and do likewise.”

When the LORD revealed Himself to Moses, He described Himself as “a God merciful and gracious, slow to anger, and abounding in steadfast love and faithfulness” (Exodus 34:6). His covenants with Israel were motivated by His grace, mercy, and love. Therefore, the love shown by individuals in Israel was to be understood as a gift from the LORD; any mercy they showed was animated by the mercy already shown by God.

When Jesus came, He found that many Jews were getting things backwards. Instead of saying, “God has been merciful to us, so now we live grateful lives of limitless mercy toward all others,” they said, “Let’s codify how much mercy we need to show—and determine to whom we need to show it.” The lawyer in the story of the Good Samaritan was a legalistic Pharisee and held to the latter attitude. Jesus used the story to call Israel back to the proper perspective.

The lawyer was well versed in God’s Law, which requires total love toward Him and selfless love toward the neighbor (Luke 10:25-28). Thinking obedience to the Law was the path to eternal life, he asked, “Who is my neighbor?” in an attempt narrow the requirement of “mercy toward all” down to “mercy toward some.”

Jesus’ story portrays actions far beyond typical sinners’ inclinations to mercy. We, like the priest and Levite, regularly act without love and mercy—even toward our families and friends! But the Good Samaritan interrupted his journey (implying a long trip) in order to help a complete stranger, risking his own life (clearly, highway robbers were nearby). He not only performed first aid and transported him to the inn, but also basically said, “Here is my credit card. Feed and care for him as long as necessary.”

Our best attempts to “go and do likewise” are exposed as total failures in the light of God’s strict Law. But Jesus, THE Good Samaritan, did “go and do likewise.” He found us dying sinners, totally estranged from God, and paid all He had—perfect obedience during His life and a sacrificial death for our sins—in order to redeem us. He has freed us from sin to live under His mercy, so that by repentance and the forgiveness of sins our lack of mercy is pardoned. Whatever our vocations, “We love because He first loved us” (1 John 4:19).

The most merciful thing we can do for our neighbors is to introduce them to the true Good Samaritan, who saves us from the deadly wounds of sin: “God, being rich in mercy, because of the great love with which he loved us, even when we were dead in our trespasses, made us alive together with Christ—by grace you have been saved” (Ephesians 2:4-5).

Prayer: O God, You declare Your almighty power above all in showing mercy and pity. Mercifully grant us such a measure of Your grace that we may obtain Your gracious promises and be made partakers of Your heavenly treasures; through Jesus Christ, Your Son, our Lord, who lives and reigns with You and the Holy Spirit, one God, now and forever. Amen.