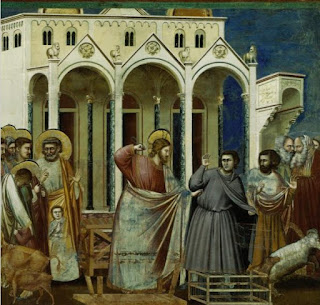 1 Kings 6:1-14 (ESV) In the four hundred and eightieth year after the people of Israel came out of the land of Egypt, in the fourth year of Solomon’s reign over Israel, in the month of Ziv, which is the second month, he began to build the house of the LORD. The house that King Solomon built for the LORD was sixty cubits long, twenty cubits wide, and thirty cubits high. The vestibule in front of the nave of the house was twenty cubits long, equal to the width of the house, and ten cubits deep in front of the house. And he made for the house windows with recessed frames. He also built a structure against the wall of the house, running around the walls of the house, both the nave and the inner sanctuary. And he made side chambers all around. The lowest story was five cubits broad, the middle one was six cubits broad, and the third was seven cubits broad. For around the outside of the house he made offsets on the wall in order that the supporting beams should not be inserted into the walls of the house. When the house was built, it was with stone prepared at the quarry, so that neither hammer nor axe nor any tool of iron was heard in the house while it was being built. The entrance for the lowest story was on the south side of the house, and one went up by stairs to the middle story, and from the middle story to the third. So he built the house and finished it, and he made the ceiling of the house of beams and planks of cedar. He built the structure against the whole house, five cubits high, and it was joined to the house with timbers of cedar. Now the word of the LORD came to Solomon, “Concerning this house that you are building, if you will walk in my statutes and obey my rules and keep all my commandments and walk in them, then I will establish my word with you, which I spoke to David your father. And I will dwell among the children of Israel and will not forsake my people Israel.” So Solomon built the house and finished it.

God gave Moses instructions for establishing the mobile Tabernacle, in which the LORD would come to dwell and be accessible to Israel (Exodus 25). David desired to build a permanent Temple for the Lord’s name (1 Kings 5:3), but the Lord forbade it because David was a man of war and shed so much blood (1 Chronicles 22:8). Nonetheless, David contributed to its eventual construction by giving instructions and collecting materials for it (1 Chronicles 22; 29:6-9; 2 Chronicles 2:3-7).

The long-anticipated Temple was built under Solomon’s supervision (1 Kings 5-6). The Lord gave Solomon wisdom to undertake this enormous project (1 Kings 5:12). He relied on Hiram’s expert timber workers and employed Israelites and many conquered Canaanites.

At the Tabernacle and Temple, the Lord’s name dwelled and He was present to meet with His people, hear their prayers, and bless them (Exodus 20:24). The Temple was the Lord’s sanctuary that housed “the ark of the covenant of the LORD and the holy vessels of God” and was a “house built for the name of the LORD” (1 Chronicles 22:9). The Lord promised, concerning the Temple, “My eyes will be open and My ears attentive to the prayer that is made in this place” (2 Chronicles 7:15).

But the Old Testament Tabernacle and Temple were only provisional, pointing to the New Testament, when God would dwell with His people in a more wonderful way, in Jesus Christ! The eternal Son, the Word of God was made flesh and “tabernacled” among us (John 1:1, 14). His body became the true and final Temple of God and was put to death for our sins but raised on the third day (John 2:18-22).

Jesus still tabernacles with us and is our Temple because He has promised, “Wherever two or three have been gathered in my name, there am I among them… I am with you always, to the end of the age” (Matthew 18:20, 28:20). He continues to be Immanuel, “God with us,” (Matthew 1:23) in His Church through the Word and Sacraments. We are corporately and individually “God’s temple,” where the God’s Holy Spirit dwells (1 Corinthians 3:16-17, 2 Corinthians 6:16). And because of God’s wonderful promises to us in Christ, we can confess with confidence, “Surely goodness and mercy shall follow me all the days of my life, and I shall dwell in the house of the LORD forever” (Psalm 23:6).

Prayer: Lord Jesus, You have joined us to Yourself in Holy Baptism and made our bodies a temple of Your Holy Spirit. May the fruit of the Spirit be born in our bodies as we show forth in the world Your love, joy, peace, patience, kindness, goodness, faithfulness, gentleness, and self-control, for against such things there is no law; for You live and reign with the Father and the Holy Spirit, one God, now and forever. Amen.