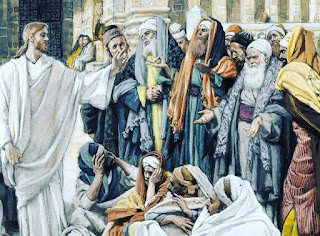 The latest media firestorm centers around the hypocritical behavior of the current US Speaker of the House. On this there is no need for my comment, but my question is, “What sort of hypocrisy is evident in your life (and mine)?”

No matter how much we hate the idea that we too are hypocrites, we cannot avoid God’s judgment on us: our actions have not always been consistent with our beliefs, so we could just as well confess, “I, a poor, miserable hypocrite…” at the beginning of the service.

But here’s the Good News: Jesus never avoided the Pharisees, those hypocrites; He kept on teaching them, eating with them, rebuking them, and inviting them to repent. Some of the Pharisees, like Nicodemus and St. Paul, did repent. They cast aside their self-righteous hypocrisy and found forgiveness in Jesus. So have you, by confessing your sins and receiving Christ’s Absolution.

And the reason Jesus is so ready to forgive our hypocrisy is because He is the only One who isn’t a hypocrite. No, in His life and Words, He was entirely consistent, entirely honest, entirely righteous, perfectly obedient.

Just as Adam’s sin happened only once but its effects span the ages, so also Christ’s death has an eternal impact. The Epistle to the Hebrews (10:12) says, “When Christ had offered for all time a single sacrifice for sins, he sat down at the right hand of God.” A single sacrifice for all the hypocritical sins of all times, and that forgiveness has been accomplished for you, too.

Prayer: Almighty God, merciful Father, since hypocrites and ungodly people are found among the faithful within the Church, and because hypocrisy and lawlessness clings to our old sinful flesh, do not permit Satan to disrupt our congregation through such wickedness. Grant that Your Word may bring all of us to repentance and faith. Grant us patience and kindness and a forgiving heart toward all. Help us, for the sake of all in our congregation, to speak the truth in love; through Jesus Christ, our Lord. Amen.