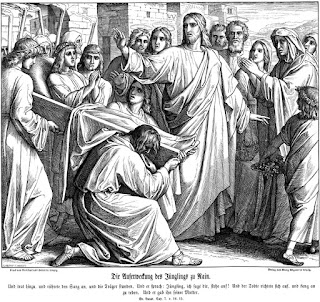 Luke 7:11-17 (ESV) Soon afterward he went to a town called Nain, and his disciples and a great crowd went with him. As he drew near to the gate of the town, behold, a man who had died was being carried out, the only son of his mother, and she was a widow, and a considerable crowd from the town was with her. And when the Lord saw her, he had compassion on her and said to her, “Do not weep.” Then he came up and touched the bier, and the bearers stood still. And he said, “Young man, I say to you, arise.” And the dead man sat up and began to speak, and Jesus gave him to his mother. Fear seized them all, and they glorified God, saying, “A great prophet has arisen among us!” and “God has visited his people!” And this report about him spread through the whole of Judea and all the surrounding country.

One of the strangest developments of the past 25 years or so is the proliferation of “reality TV” programs. Perhaps there is nothing more unrealistic and artificial than a reality TV show, but the networks love these programs since they cost almost nothing to produce and people line up hundreds-deep to be on them. So many people in our culture think that they haven’t really lived until they’ve been on TV or had a video go viral, until they’ve reached some sort of notoriety on the tube or in the cloud. This quest for fame is the opposite of what St. Paul bids us pray for ourselves, “that we may lead a peaceful and quiet life, godly and dignified in every way.”

One of the reasons people watch reality TV and all forms of entertainment media is to escape the grim realities of their own lives. Now a little escapism isn’t a bad thing—moderation in everything, my grandfather always said—but my concern for us Christians is that we can become so intent on fleeing the harsher realities of this life, such as the fact that we are all dying, that we fail to reflect each day on our mortality. Or to put it another way, we can get so busy amusing ourselves that we wind up ignoring the reality of God’s judgment upon our sin and the reality that we deserve everlasting damnation in hell for our sins.

All the bleak, sad, and terrible realities in our lives are the result of humanity’s plunge into sin after the creation. The consequence God placed upon sin is death: “the wages of sin is death.” We can’t escape death, try as we might. But we can escape thinking about it for a while by burying ourselves in things that occupy our minds to keep them from thinking about death. This is why people don’t like hearing about sin: sin is the sting of death. Sin is made known by the Law, so the Law is what gives it its stinging power: the Law says, “Sin must be judged and punished.” So then sin oppresses us, eats at us, reminds us of temporal and eternal death.

But when we try to anesthetize ourselves to this sting of sin by escapism, or drugs, or alcohol, or by burying ourselves in our work, we will be no more successful than Adam and Eve at hiding from God, escaping from Him. The Law keeps poking and prodding and stinging us, reminding us that we must face up to God, that we are actually dead in sin and unable to save ourselves and give ourselves eternal life.

But when we do face up to God as He has revealed Himself in His Word, the Bible, we discover something far more wonderful than we could ever have come up with on our own. Natural, sinful man can only conceive of God as Judge, but God in Christ reveals Himself as merciful, the Savior of sinners. For Jesus doesn’t try to escape the reality of suffering and death but embraces our sinful, dying world, draws it into Himself, and alters reality: Christ’s death actually reconciles the world to God. He answers for all sins, so that God is no longer angry with Mankind for his sin, God no longer counts men’s trespasses against them.

And this same Jesus did not stay in the grave but rose on the third day, never to die again—death no longer has dominion over Him! And He comes to us today with His Word of Life to speak those who were once dead in sin into eternal life by forgiving their sins. Through the Gospel and the Sacraments, He gives life to the dead, just as easily as He raised up the widow’s son at Nain—and in just the same manner: by the power of His life-giving Word!

1. Speak, O Lord, Your servant listens,
Let Your Word to me come near;
Newborn life and spirit give me,
Let each promise still my fear.
Death’s dread pow’r, its inward strife,
Wars against Your Word of life;
Fill me, Lord, with love’s strong fervor
That I cling to You forever!
2. Oh, what blessing to be near You
And to listen to Your voice;
Let me ever love and hear You,
Let Your Word be now my choice!
Many hardened sinners, Lord,
Flee in terror at Your Word;
But to all who feel sin’s burden
You give words of peace and pardon.
3. Lord, Your words are waters living
When my thirsting spirit pleads.
Lord, Your words are bread life-giving;
On Your words my spirit feeds.
Lord, Your words will be my light
Through death’s cold and dreary night;
Yes, they are my sword prevailing
And my cup of joy unfailing!
4. As I pray, dear Jesus, hear me;
Let Your words in me take root.
May Your Spirit e’er be near me
That I bear abundant fruit.
May I daily sing Your praise,
From my heart glad anthems raise,
Till my highest praise is given
In the endless joy of heaven. Amen.
Posted by Pastor Roth at 6:35 PM