I Do Believe! Help My Unbelief! 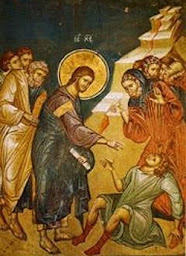 Mark 9:14-29 (ESV) And when they came to the disciples, they saw a great crowd around them, and scribes arguing with them. And immediately all the crowd, when they saw Jesus, were greatly amazed and ran up to him and greeted him. And he asked them, “What are you arguing about with them?” And someone from the crowd answered him, “Teacher, I brought my son to you, for he has a spirit that makes him mute. And whenever it seizes him, it throws him down, and he foams and grinds his teeth and becomes rigid. So I asked your disciples to cast it out, and they were not able.” And he answered them, “O faithless generation, how long am I to be with you? How long am I to bear with you? Bring him to me.” And they brought the boy to him. And when the spirit saw him, immediately it convulsed the boy, and he fell on the ground and rolled about, foaming at the mouth. And Jesus asked his father, “How long has this been happening to him?” And he said, “From childhood. And it has often cast him into fire and into water, to destroy him. But if you can do anything, have compassion on us and help us.” And Jesus said to him, “ ‘If you can’! All things are possible for one who believes.” Immediately the father of the child cried out and said, “I believe; help my unbelief!” And when Jesus saw that a crowd came running together, he rebuked the unclean spirit, saying to it, “You mute and deaf spirit, I command you, come out of him and never enter him again.” And after crying out and convulsing him terribly, it came out, and the boy was like a corpse, so that most of them said, “He is dead.” But Jesus took him by the hand and lifted him up, and he arose. And when he had entered the house, his disciples asked him privately, “Why could we not cast it out?” And he said to them, “This kind cannot be driven out by anything but prayer.”

But confession is not something we are able to do on our own, without the Lord first giving us His Holy Spirit. The Word of God is the only thing that can enable us to confess our sin or faith. His Word of Law reveals our sin and unbelief, and His Gospel delivers forgiveness of sins, which creates faith and moves us to ask the Lord to get rid of the sin and unbelief that remain in us.

The Lord speaks first, and only then can we respond with a correct confession at all. This is what happens in Mark 9. The father of the demon-possessed boy did not realize his unbelief until Jesus rebuked him, but after Jesus spoke, then the man was able to confess: “Lord, I do believe! Help my unbelief.”

But first he was rebuked. After the disciples had been unable to overcome the power of the demon, the man got to speak to Jesus directly, as he had hoped to all along, because he thought Jesus would be able to help. But the man also doubted. He said to Jesus, “If you can do anything, have compassion on us and help us.” That’s a big “if.” It expresses uncertainty in the power of Jesus. You can tell Jesus took it this way because He said incredulously, “ ‘If you can!’ All things are possible for the One (τῷ) who believes (πιστεύοντι)!”

Saving faith looks to Christ alone to find God and His salvation. Look to Jesus, to whom all things are possible, especially our eternal salvation. Unlike us, Jesus never doubted God’s power nor did He ever doubt God’s good and gracious will. In the garden of Gethsemane, as Jesus faced the prospect of death by crucifixion under God’s wrath against our sin, Jesus prayed, “Abba, Father, all things are possible for you. Remove this cup from me. Yet not what I will, but what you will” (Mark 14:36). He submitted to His Father’s will and trusted that God would raise Him from the dead.

Although the Father placed all of our guilt and shame upon Christ and afflicted Him with the torments of hell instead of us, the Father was always near to save His Son and to vindicate His righteous cause, the cause of saving us. Christ was put to death for our sins and raised for our salvation, and since “all things are possible for the One who believes,” His death was able to accomplish forgiveness for all of the world’s sins and His resurrected life is able to grant the greatest of all possibilities—everlasting life—to all who believe in Him. “For God loved the world this way: He gave His only Son, that whoever believes in Him should not perish but have everlasting life” (John 3:16).

And such promises from God to us in the Scriptures—His assurances that He is for us in every case, that He will never leave us nor forsake us, that He will not destroy us but keep us eternally safe—His promises make us bold to cry out, “Lord, I do believe! Help my unbelief!”

1. We walk by faith and not by sight,

No gracious words we hear

From Him who spoke as none e’er spoke,

But we believe Him near.

2. We may not touch His hands and side,

But in His promise we rejoice

And may our faith abound

To call on You when You are near

And seek where You are found.

4. For You, O resurrected Lord,

Are found in means divine:

Beneath the water and the Word,

Beneath the bread and wine.

5. Lord, when our life of faith is done,

In realms of clearer light

We may behold You as You are,

With full and endless sight. Amen.